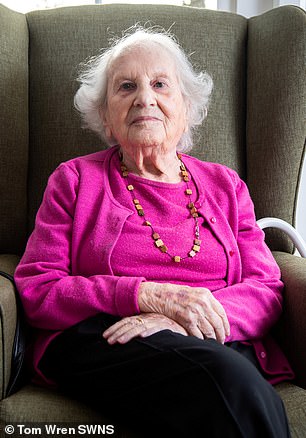 A Jewish woman living in Britain revealed she once lived in the same apartment block as Adolf Hitler – and even saw a coffin being taken from his flat.

Alice Frank Stock spent years living in the same apartment block as the future Nazi dictator while growing up in Germany during the 1920s and 1930s.

The centenarian’s family home was at Prinzregentplatz (Prince Regent Square) in Munich.

Ms Stock, who recently turned 102, said she would sometimes see Hitler being rushed into the building while flanked by towering SS guards.

Rumours were rife about his nocturnal activities – including the mysterious fate of his niece Geli Raubal with whom he was reportedly in a relationship with.

Ms Stock says she once saw a coffin being carried out of Hitler’s apartment – which she and others speculated could have been the body of Geli who had shot herself. 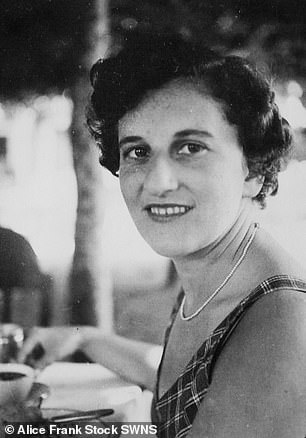 But she said Hitler was mostly unseen by her and her family, who were later forced to leave Germany just days before the outbreak of WW2.

Ms Stock later moved to Britain and has now turned 102 at her care home in Bristol.

Due to Covid restrictions, she celebrated only with staff and residents at Druid Stoke Care Home, which is run by Bupa.

The centenarian can still remember her days living in the affluent area and her encounters with the notorious dictator.

She said: ‘We lived in a house – a big house – and there were two entrances.

‘One was our apartment, number 14 – the other was either number 13 or 15. That’s where Hitler lived. 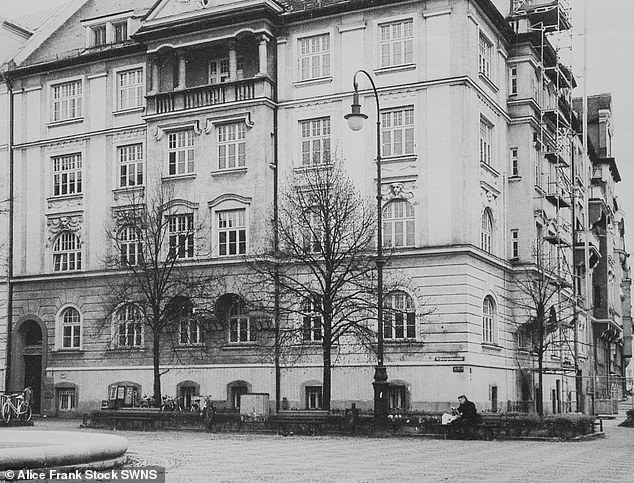 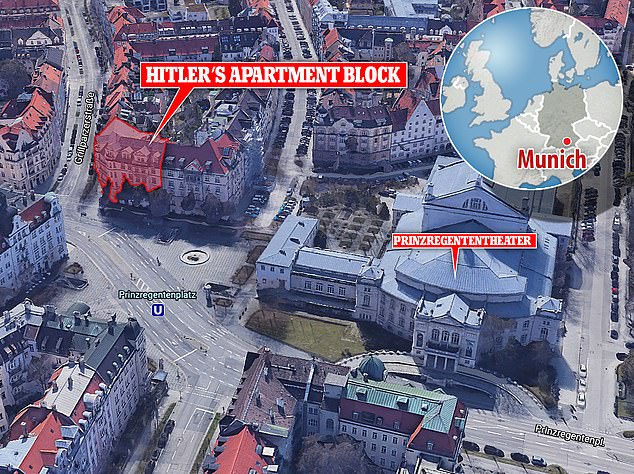 ‘We heard many [rumours], from the cook and others. We saw a coffin being carried out of the entrance.

‘I think a niece of Hitler’s was living there and then she died.

‘There was speculation of how and when she died. I think there was truth in it that the coffin was carried out and in it was a woman.

‘But there was no confirmation ever – and you couldn’t talk openly.’

Hitler’s relationship with Raubal – the daughter of his half-sister – was a matter of controversy even within the evil Nazi party.

It was rumoured among contemporaries that the pair were in a romantic relationship – despite the 19-year age gap and family ties. 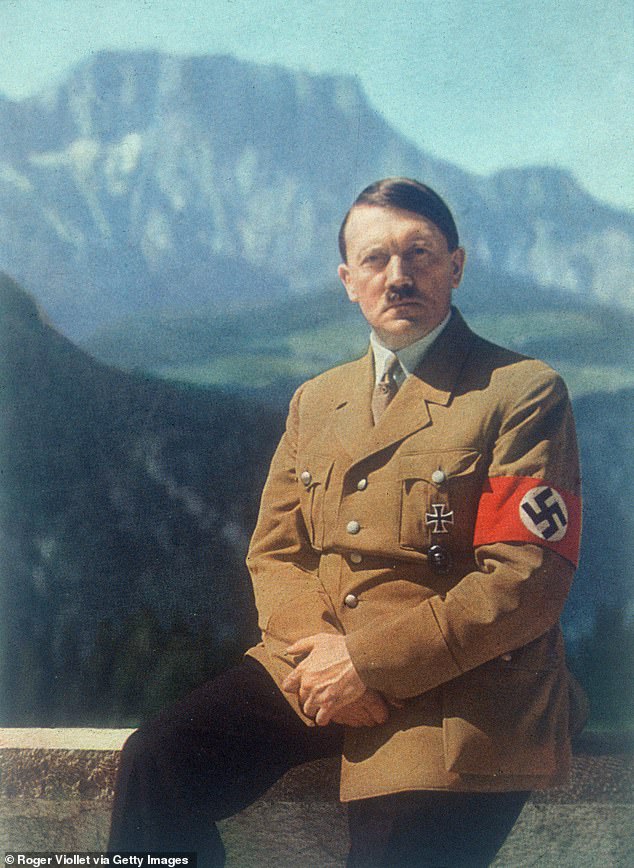 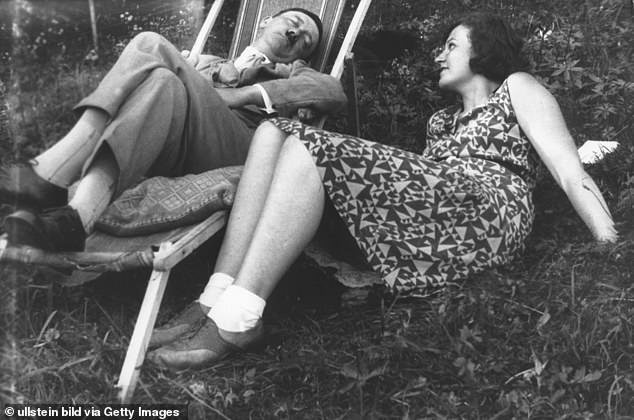 Raubal took her own life in Hitler’s Munich apartment in 1931 with his gun at the age of 23 – although theories about his involvement in the death persist today.

Despite her close proximity to the Führer, Ms Stock said she rarely saw him – and never had any personal interactions.

She said: ‘I never spoke to him. Once I went to the opera – I got tickets through the school, it was in the royal box. I was very pleased.

‘I got there in the evening and there were SS men saying: ‘You can’t come in here – go two boxes further down’.

‘As the curtain went up I looked at the royal box – and there was Hitler sitting there.

‘I saw him once or twice coming home too. His car would draw up.

‘Two SS men would jump out stand either side and he would rush up to the house – terrified obviously of someone who would try and kill him.’ 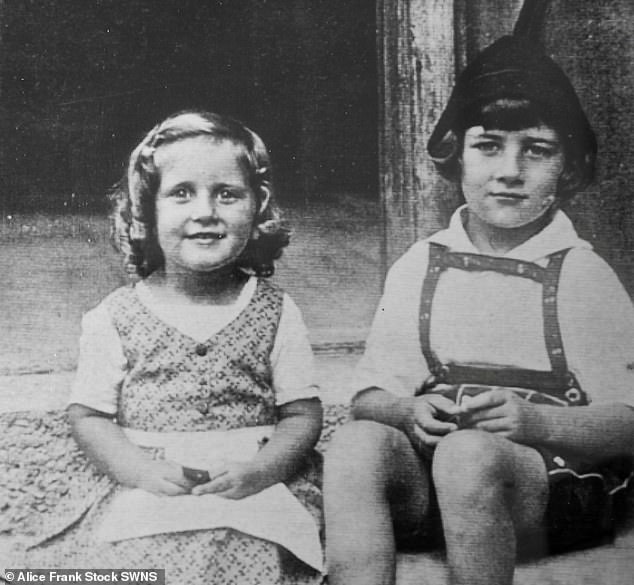 Ms Stock said Hitler was mostly unseen by her and her family, who were later forced to leave Germany just days before the outbreak of WW2. Pictured: The woman then aged 3 with her brother Richard, who was three years older 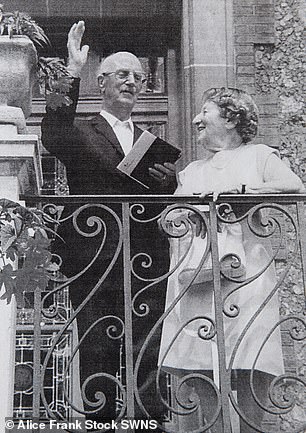 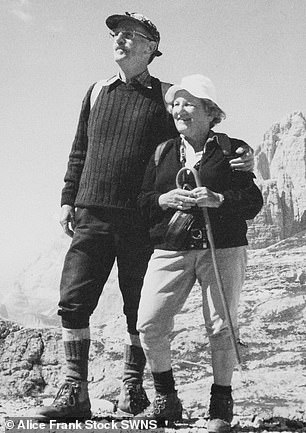 Ms Stock also revealed that the fear of retribution was strong even at the early stage of Hitler’s career.

She said: ‘We had a wonderful cook who was elderly and very Catholic – and very anti-Hitler.

‘Once she went out and saw a photo of Hitler hanging on the wall and she said: ‘Yes he should be hanged, the scoundrel – but not like this!’

‘I said: “You’ll get us all into a concentration camp”.’

When asked what she would say to Hitler knowing what she knows now, Ms Stock said: ‘I wouldn’t want to talk to him because my feelings would be too strong – I couldn’t.’

Ms Stock was born in the city of Augsburg before moving with her family to Munich as a three-month-old baby in 1918. 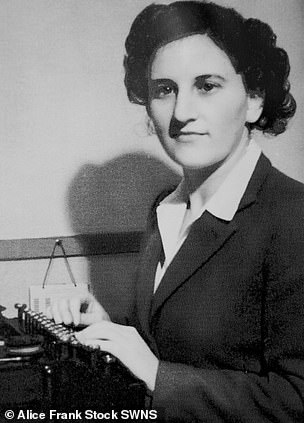 Alice Frank Stock is pictured in the 1950s

She spent her formative years there before being sent to study in Lausanne, Switzerland at the age of 17 due to the growing threat to Jewish people in Germany.

She then moved to London in 1937 to attend secretarial college, with her parents following two years later – just two days before the start of World War Two.

The family were forced to sell a 200-year-old violin to stump up the £1,000 needed to enter England – which Ms Stock managed to smuggle out of Germany.

Talking about being Jewish in a society that was rapidly becoming outwardly antisemitic, Ms Stock said: ‘In my school people were on the whole decent. My classmates were decent, too.

‘But I can tell you of one incident, in an English lesson.

‘The teacher said: “Of course, we Germans face our God as free men while the Jews roll in the dust”. I didn’t say anything.

‘I went out into the corridor after and he said: “Look Frank, I didn’t know you were Jewish.”

‘I said: “Professor, why would you make such remarks? You don’t believe it yourself, do you?”.

Ms Stock worked for the BBC and the Organisation for Economic Co-operation and Development (OECD) after leaving Germany.

She would listen to radio transmissions from her birth country during the war and flag up anything noteworthy to her superiors – such as a large gathering of soldiers. 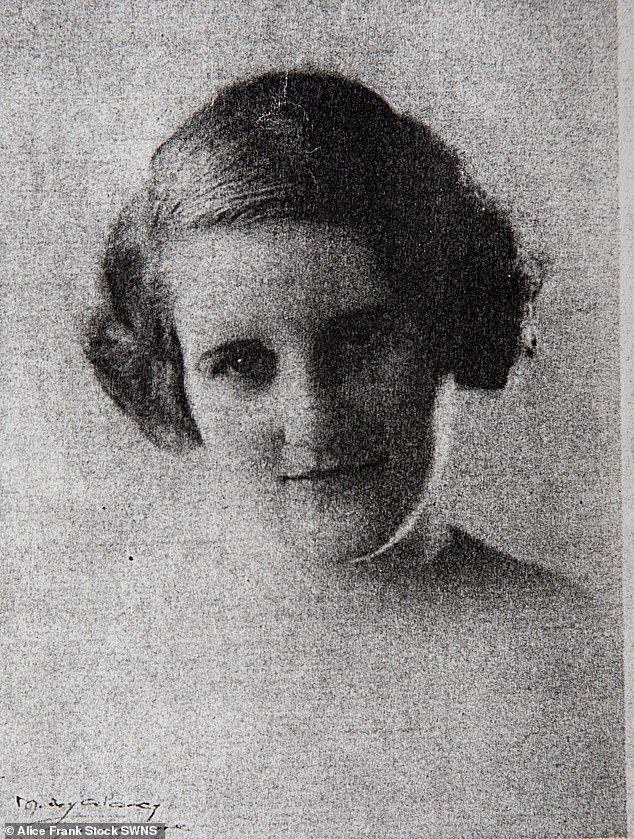 Ms Stock worked for the BBC and the Organisation for Economic Co-operation and Development (OECD) after leaving Germany. Pictured: Her in 1936 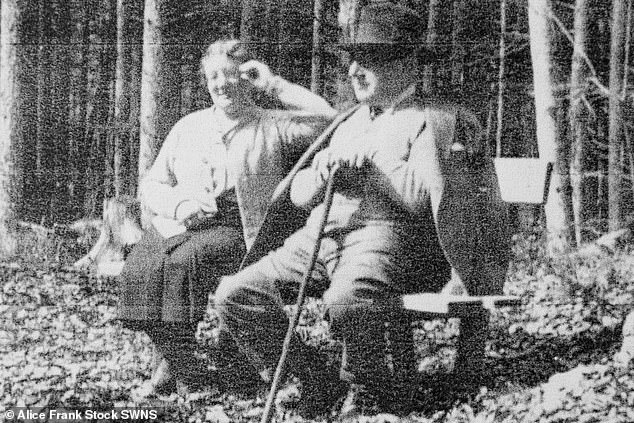 Alice Frank Stock’s parents August and Valerie in 1930, before they were forced to flee Germany

She then met her husband Roy Macdonald Stock – a Military Cross winner – while working for the OECD in Paris in 1966.

The pair were together for 38 years before they married in 2004, and did not have any children.

They left the French capital in 2009 and retired to Bristol, where Roy was from originally. He sadly died in 2011.

Ms Stock added: ‘I have had a good life. [I would advise] lots of walking and hiking, along with the occasional glass of red wine!’

Hitler’s apartment on Prinzregentplatz was also the birthplace of the Nazi party. 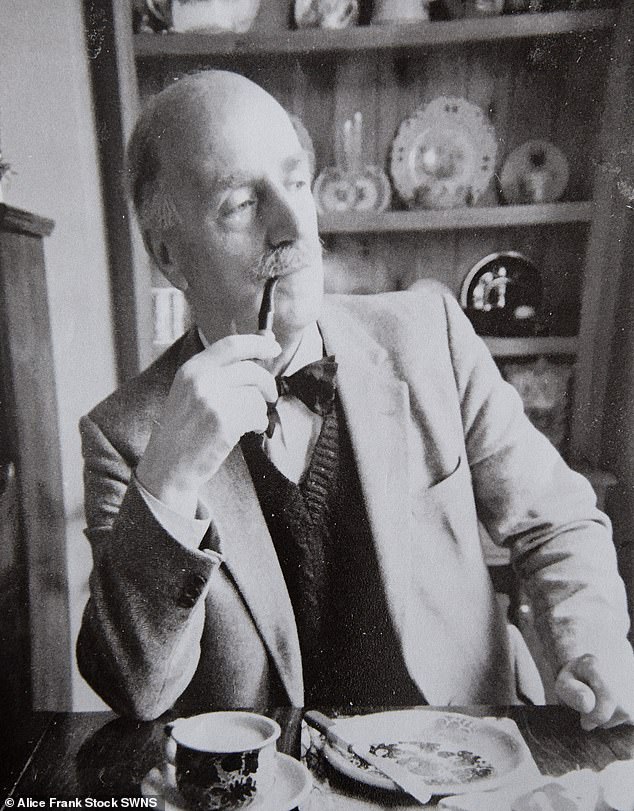 He remained the property until 1934, when he moved after becoming Chancellor of Germany in 1932.

Although he retained ownership he returned infrequently, preferring to spend his time in Berlin or The Berghof, a rented villa near Berchtesgaden.

The building in Munich still stands and has been occupied for various usages over the years.

How Hitler plotted rise to power from his unremarkable Munich apartment 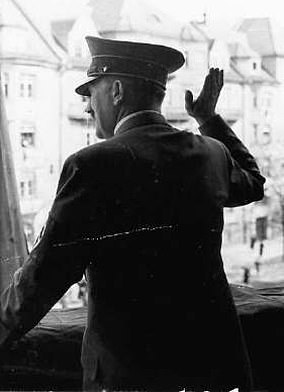 Hitler is pictured at the window of his apartment on Prinzregentenplatz

Hitler’s apartment at Prinzregentenplatz served as one of the most important locations in the rise of the Nazi Party in the early 1930s.

The party leader moved from his relatively humble home in Thierschstrasse to the grander surroundings of Prinzregentenplatz in 1929.

Located on the second floor of the block, the apartment included nine rooms, two bathrooms, a kitchen, a spacious hallway, and a cloakroom.

At first, Hitler rented the apartment, before the whole block was eventually bought by the Nazi Party during its formidable rise to power in the 1930s.

Hitler’s favoured neice, Geli Raubal, moved into the apartment in 1929 and there were rumours that her relationship with Hitler had been romantic.

While he was away in Erlangen in September 1931, Geli was found dead in one of the rooms with a single gunshot wound to the head.

Her death was pronounced as a suicide by a coroner, with Hitler falling into a ‘great depression’, maintaining her rooms in the apartment as she left them.

A year later in 1932, Hitler and the Nazi Party would convince millions of Germans to vote for fascism under the guise of ‘rebuilding the nation’. 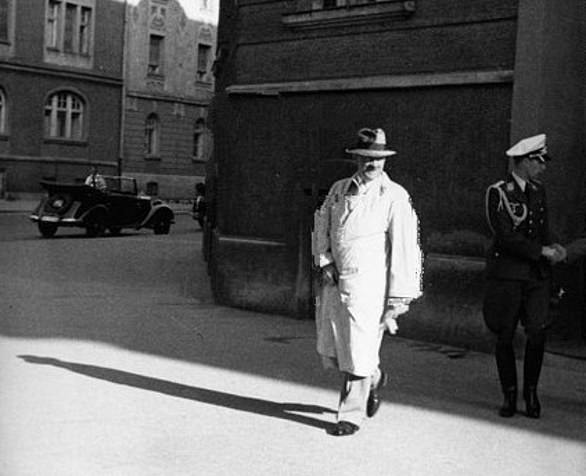 Soon after winning his desired majority, the government passed an act that gave Hitler the power to change the law without having to go through the German congress, silenced the free press and started his road towards a dictatorship, a Third Reich, and his ‘final solution’.

By January 1933, President Hindenburg was forced to make Hitler chancellor of Germany and the Third Reich’s road to absolute power had begun.

Hitler continued to live in the apartment until 1934, when he became Fuhrer and Reichskanzler of Germany.

He continued to use the apartment sporadically, infamously meeting British Prime Minister Neville Chamberlain there in 1937 after signing the Munich Accords.