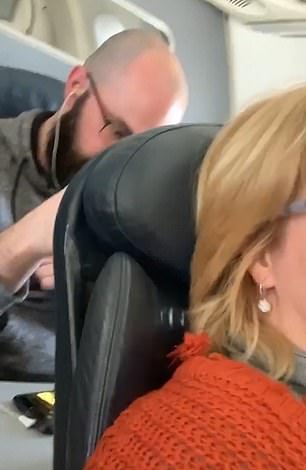 By Jennifer Newton for MailOnline

An American Airlines passenger has divided social media after video-shaming a fellow traveller who ‘punched’ and pushed her seat when she reclined it.

The passenger, Wendi Williams, filmed the man – who was sitting in a seat behind her that didn’t recline – on a flight from New Orleans to Charlotte.

She posted a clip of him continually nudging her seat to Twitter, but many on the social media site were conflicted about who was in the wrong and whether she should have even reclined her seat in the first place.

@BravoAndy Here’s a great jackhole! He was angry that I reclined my seat and punched it about 9 times – HARD, at which point I began videoing him, and he resigned to this behavior. The other jackhole is the @AmericanAir flight attendant who reprimanded me and offered him rum! pic.twitter.com/dHeUysrKTu

An American Airlines passenger, Wendi Williams, has divided social media after shaming a fellow traveller who she claimed repeatedly punched  her seat when she reclined it

Wendi claims that when she first reclined her seat, the man asked her to put it back up while he ate – and she complied.

However, when he finished eating, she reclined again and alleges that ‘he punched my seat about nine times’.

She then ‘started videoing’, with the clip showing him rhythmically and forcefully jabbing her seat.

She wrote on Twitter: ‘I’m in pain. I have one cervical disk left that isn’t fused – the first one which allows me some mobility.

‘It’s scary because it’s this kind of injury that could do it in. I am grateful for the limited movement I still have and shouldn’t have had to endure repeated blows.’

Wendi also claims that despite complaining to a flight attendant, they offered the man a complimentary drink and threatened to have her escorted off the plane.

She also says that after complaining to American Airlines, she was told she would have to get in touch with the FBI ‘to get any resolution’.

She tweeted: ‘The airline didn’t really accept any culpability, although she apologized and said what happened was wrong – that’s it.’

After Wendi posted the video to Twitter, many people took to the social media site to back her

Some on Twitter such as Lynn Beckman backed Wendi saying: ‘I can’t believe American Airlines did nothing for this poor woman but gave this creep a drink.’

Another called ‘Theexistentialbiker’ added: ‘If I paid for the damn seat I’ll recline if I want to. His behaviour would’ve gotten me arrested.’

While ‘Barbsbuzz’ tweeted: ‘I would have stood up and said “hey pal, I paid for this seat, the whole seat so keep your hands to yourself”. And then loudly complained he’s harassing me and I’m afraid of what he will do. Kept calling the flight attendant.’

But not all were sympathetic including ‘Boondocksaint 88’, who tweeted: ‘I’m 6ft 5 and can’t stand inconsiderate people putting their seats back.

‘Being the size I am, I still won’t recline due to having courtesy for others. If it was me you wouldn’t have got your seat back so count yourself lucky this guy let you.’

While Rodell added: ‘The seat was most likely not his choice. She is complaining that he is not being considerate to her, well what is she doing?’

A spokesperson for American Airlines said: ‘We are aware of a customer dispute that transpired on American Eagle flight 4392, operated by Republic Airways, on January 31.

‘The safety and comfort of our customers and team members is our top priority, and our team is looking into the issue.’